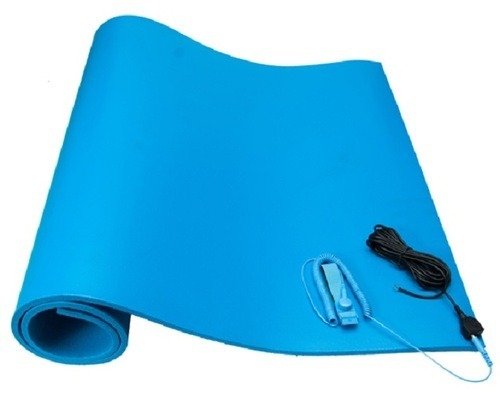 How do ESD Anti-Static Mats Work?

If you work with equipment that is particularly sensitive to static electricity, then you will know how difficult it can be to keep yourself, your tools and your workstation free from it. Fortunately, it is easy and cost-effective to reduce or eliminate the build-up of static with an ESD anti-static mat. Read on for our handy guide to what they are and how they work.

ESD stands for electrostatic discharge, which is the release of static electricity that can happen when two different objects or materials rub together. Static builds up when one material stores a positive charge and the other stores a negative one. In the right circumstances, the positively charged material will release the stored static in a burst – you may have experienced this when you touch a metal door handle or other object and get a sudden small shock. On a grander scale, the same principle is what causes lightning in a storm.

What is an ESD anti-static mat?

An ESD anti-static mat is designed to prevent the build-up of static in the first place – thus there is no stored positive charge to release in a burst. The mat causes the static electricity to flow slowly across its surface rather than building up. To use an ESD mat effectively, the operator will typically use a wrist strap connecting him or herself to the mat, which will in turn be connected to a grounding line.

Where are ESD anti-static mats used?

What are the types of ESD anti-static mat?

These mats have a non-slip base layer that prevents the mat from slipping around, a middle layer that is designed to direct any discharged electricity to the ground line and a top surface made from a dissipative material (usually a special vinyl) that allows the static to flow freely.

They are typically used on work surfaces, table tops and work benches.

A lower-cost alternative, these mats only have the grounding and dissipative layer. They are also typically used on work surfaces, table tops and benches.

Rubber has better heat and chemical resistance than the previous two types of mat, and is more hard-wearing.

Rubber mats are used on the ground usually, as they can withstand heavier punishment from people walking, stepping and standing on them.

Homogenous mats are a kind of hybrid between the rubber and table top mat types, and are manufactured from both rubber and vinyl.

These mats are more versatile and can be used effectively on both floors and work benches.